Let’s talk about terminology first. Major part of the literature on Java operates with such terms as inner classes and nested classes. Throughout this article we will be talking mainly about nested classes of which inner classes are a subset. Nevertheless frequently when talking about inner classes people mean all nested ones. Such a paradox. 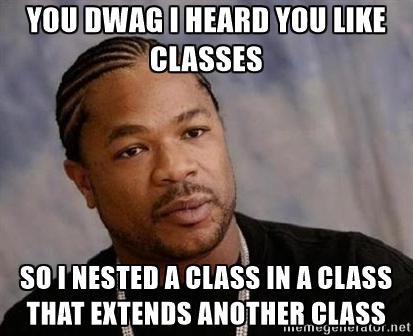 Nested class - is a class declared inside another class’s declaration, like, for example:

Static nested classes do not have access to non-static fields and methods of the corresponding framing class which makes them to some extent analogous to static methods simply declared inside the class. Non-static fields and methods may be accessed only through a reference to a framing class instance. In that static nested classes are very similar to any other high-level classes.

Besides that static nested classes have access to any static methods of an external class (including the private ones). Such classes are mainly used for entities logical grouping, encapsulation improvement, and class-space economy. Let’s consider the following example:

As you have probably noticed we are calling the Type class through its framing class - namely, Question.Type. In case of the example at the beginning of this article, StaticNestedClass creation may be done as follows:

Static nested classes may be used for one more thing - private static methods testing. For example:

All inner classes in Java may be divided into three types:

Member inner classes are associated not with an external class, but rather with its instance. And they have access to all of his fields and methods. For example:

So we are having an inner class Query, that is designed for users parametrized search. Query class may encapsulate in itself, for example, all the work with the database. But at the same time it has access to Users class state. Here is an example of how a client-side code may look like:

Had the Query class constructor been declared as public, a Query class object could have been created from the outside only through the framing class instance:

An inner class cannot have any static declarations. Instead of that the static methods may be defined inside the framing class. Besides that such classes cannot contain enums declarations inside.

One important notice - interfaces in Java cannot be instantiated. Therefore it is impossible to declare a non-static inner interface since there will be no object for external class instance association. For example, the following code:

will be interpreted as: meaning that static modifier will be added implicitly.

As it was already mentioned before, member inner class has access to all fields and methods of its framing class. Let’s consider the following code snippet:

method() call from anotherMethod will call an InnerClass method. The following construction should be used to access the framing class method - OuterClass.this.method().

Local classes are defined inside a Java code block. On practice the definition most frequently takes place inside some other class’s method. Even though local class may be defined inside both static and non-static initialization blocks.

This code (with some modifications though) was taken from a real project and is used for get web requests processing. It introduces new abstraction which is convenient to work with from inside the method and which is not needed outside of it.

Just like member classes, local classes are associated with the framing class instance and have access to its fields and methods. Apart from that local classes have access to local variables as well as parameters of the method if they are declared with a final modifier.

But local classes have number of restrictions though:

By the way, interfaces cannot be defined locally because of the same reasons they cannot be declared inner.

Anonymous classes play important role in every Java-programmer’s life. Those are local classes without their names.

Classic example of an anonymous class:

A thread is created on the basis of an anonymous class and is run by the start method of the Thread class. Anonymous class creation syntax is based on a new operator being used with some other class (interface) name and the body of the newly created anonymous class. The main limitation on the anonymous classes usage is the constructor description impossibility since the class doesn’t have a name. Arguments provided inside parentheses are automatically used with the base class constructor which matches them. For example:

Since an anonymous class is a local class as well, all the local class restrictions apply to it.

Anonymous classes usage is justified in many cases, in particular when:

That is probably it. It should be probably mentioned that if all the opportunities that nested classes provide are used wisely, your code will become cleaner, shorter and much more understandable.